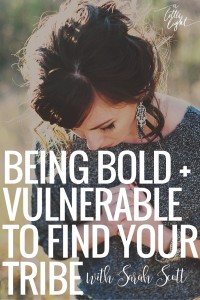 I’m not what you would call a traditional Christian.

I tried to be one for years.

Helping in church ministries, toting marriage and motherhood as the high calling of women and making sure I was listening to and reading only Christian productions.  I had created a good Christian girl bubble around myself.  People were “inspired” by how awesome I was at praying, teaching Sunday school, at washing dishes after a potluck. (If those are ways you genuinely serve God then that’s fantastic… for me those were the ways I was serving my own popularity). Not to brag but I was pretty great at those things, because they were the things that made me fit in.  They were the things that earned me the praise of my peers.  Somehow that is how I thought I would find fulfilment.

Things changed when the questions rolling around inside the bubble with me became too much for the thin walls to bare.  The bubble burst and my real journey into figuring out who this Jesus guy is and what His message is all about began.

I was terrified and alone at this trailhead.  The only other people I knew of who had changed their views of what it means to follow Jesus were my husband and those I listened to in podcasts.  (And we all know podcast people aren’t real people, right? :))

The only way to find my new tribe was to start being authentic.

Thankfully I developed a bit of sense before I developed courage. Not so true of me in my early days as a baby Christian when I tried to evangelize someone by telling them at Halloween that “the only ghost our family believes in is the Holy Ghost”.  I’m pretty sure I saw my husband physically cringe when that happened.

My voice started out quiet.  Maybe a small confession like, “I don’t understand why God would make a deal with Satan to mess with Job’s life.” would come out after Sunday lunch.

Layer upon layer my confidence built up and I was able to pose my own questions in response to people’s ignorant statements like,

“Do you think it’s that easy? I used to think that way too, until I realized that there are other issues that many poor people face.  Emotional hurt, disabilities, addictions.”

I tried to be loving with those I disagreed with.  Often, but not always, successful in my efforts to love.

Sometimes I would give the other person something to ponder and other times I was dismissed.

Those people who refused to even entertain that I may have a point would inevitably frustrate the living snot out of me.  I would rant and rave about them to my husband.  “Honestly!  These people don’t know how to love!”  He would gently remind me that I was there once too and people travel through life lessons at different paces. He really is the calmer one out of the two of us.

I struggled the most during those first miles.  Was my doubt going to send me to hell?  Was my apparent lack of submission going to make me lose everything that I believed?  Where would this friggin’ path lead to and would I like what I found when I arrived?

My tiny voice was like a drop in the ocean, but it was my voice and I kept using it.

Something magical happened as I became braver and more vulnerable in my own searching and studying.  I found a tribe.  A tribe that continues to grow and branch out and search and learn.

Just like everyone else, we have our little quirks.  We travel at different speeds, sometimes one veers to the left and another to the right, but we are willing to wrestle with the gospel together and as individuals.   We are willing to hold most things with an open hand realizing that because our thinking has changed once, it could happen again.  Clinging to Jesus and hoping to be known by our love – we travel on, inviting the lonely stragglers into our midst as we meet them along the way.

Our messages have value and the value lies in that we deliver them.  Do we love others enough to ask difficult questions and get caught up in deep life changing conversations, or will we chat about the weather over tea and never step off the front porch?

Stop by Sarah’s site, Sarah on Purpose, and give her some love.

Co-founder of A Little Light Author of simpleonpurpose.ca
See all posts by Shawna Scafe