Becoming a woman who passionately wants to be used by the Lord is a journey of its own. But what happens when you get to that place? When you gather up your list of ‘gifts’ and ‘big dreams’ on how to serve others and then God gives you a new plan?

I asked the community to share their thoughts on PASSION and Sherilyn had some real, hearty inspiration on what it looks like when you have to realign your passions to fit the life formed after the onset of an illness.  Thank you for your story Sherilyn. . . . 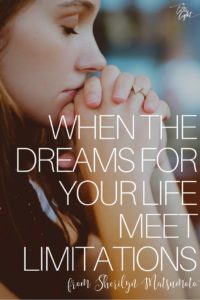 I have been a believer in Jesus Christ for 43 years, but it wasn’t until two years ago that I finally let go of the life I thought I wanted and began to live the life He’s laid before me.

I was tootling along 29 years ago with my three children, kicking through Autumn leaves in the woods near our home in a suburb of Buffalo, NY, when a tick crawled onto me somewhere and bit me, infecting me with Lyme disease.  Lyme was much less virulent then than it is now, so I went merrily on my way, unaware of the fight that was coming in 10 years.

I ignored symptoms like the horrendous flu I “caught” — three years in a row. Other, small symptoms popped up until I couldn’t ignore them any longer in March of 1997 after moving to southern California the year before.  Within a week I could barely breathe while walking and took to sleeping 18-20 hours a day.

Two years later, after getting a proper diagnosis from a doctor two hours away, I began to feel a bit better. But, through the years, I haven’t been able to stay on oral antibiotics more than a year or less at a time. IV antibiotics were really the key to kicking Lyme to the curb, but my insurance companies have never paid for those when it comes to Lyme disease.

As a result, my symptoms have slowly increased and gotten worse. I am now faced with physical limitations I never would have dreamed of 29 years ago, or even 18 years ago. I had high hopes of being healed either through medicine or by the Lord. That hasn’t happened, although I know healing by God could still occur any day.

But I think God has used this illness to draw me closer to His heart of grace and mercy more deeply than I ever imagined when I was 16 years old — when I was full of hopes and dreams of living a “happy, fulfilled” life for the Lord.

He has given me gifts I thought could only be used if I could be active and among other people. Those gifts reflect who He made me to be — a woman who is hospitable, compassionate, loves to encourage and show mercy to others. He’s shown me how I can use those gifts from within my home.

He called me to be a pray-er three years ago, and I struggled against such a ministry. Praying is a lonely activity because I pray by myself in the “closet” in my bedroom, where I have a large cork board on the wall above my desk. There, I have tacked up pictures and index cards, reminders of those He wants me to pray for.  I also send up prayers throughout the day for all kinds of people and situations as He brings them to my attention or mind.  I do a lot of praying while I lay on the two heating pads that ease the tightness and pain in my back and neck. I also take those opportunities to listen to praise music.

When I read the newspaper, which isn’t very often, I find myself praying for a myriad of different types of people and situations. I hear a lot of train whistles during the day, so I ask God’s protection for the engineers, other workers and passengers, as the noise fades away. I ask on behalf of those who will die in the next 24 hours that God would, somehow, some way, provide an opportunity for salvation.  I used to walk around the rather large area that comprises our neighborhood with my husband. Now, my vertigo is such that I cannot do that anymore, but I can still pray for my neighbors. And I can walk with my cane to the two neighbors God’s given me on either side of my house, so as to invite those dear ladies for coffee or tea. He’s given me more prayer opportunities there as I pray for their salvation, as well. Islam and Hinduism are their beliefs, but I pray God will help me use what little hospitality remains for me to give to draw them closer to the true God.

His peace has invaded my heart as I’ve learned to thank Him for every, single thing in my life. This habit is one I developed after reading Ann Vos Kamp’s book One Thousand Gifts, followed by the devotional by the same name.

God took every dream I had and shattered them into tiny shards of glass, scattered and ground into dust. In place of those idealistic dreams, He’s given me a new dream that is a beautiful stained glass sun catcher. Through it, He shines all that He is into me, so I can reflect it back to those around me and others I will never see this side of heaven.

Sheri will soon be launching her blog, in the meantime, you can find her on Instagram.

Co-founder of A Little Light Author of simpleonpurpose.ca
See all posts by Shawna Scafe

2 thoughts on “When The Dreams for Your Life Meet Limitations”